The Collection of Manuscripts of Prof. A. D. Grigorʼev 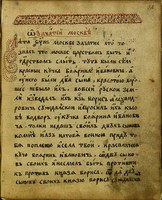 The documents are evidence of the late North Russian manuscript tradition, which survived thanks to the local conditions irrespective of the development of book printing and fast reprographic methods. They make it possible to study traditional Russian manuscript texts in the late period of the history of Russian manuscript books. The collection contains both documents of ecclesiastical nature, including prayer books, and common informative literature (with examples of correspondence between several local educated peasant families – for instance the Vereshchagins).

The collection was gathered by A. D. Grigorʼev on his repeated expeditions to the northern areas of European Russia at the turn of the 20th century. Subsequently, he handed a part of the documents to the Academy of Sciences in Saint Petersburg; shortly before his death, he gave the second part to the Slavonic Library.