The Collection of the Russian Historical Archives Abroad 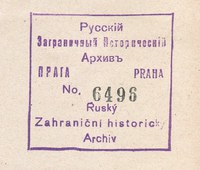 A unique part of the collections of the Slavonic Library is the library and collection of the former Russian Historical Archives Abroad. It is dominated by publications from the history of Russian social and revolutionary movements beginning with the last third of the 18th century, publications from the history of political parties, works of political writers and publicists, and memoir literature. Publications whose content is related to the period before 1800 mostly deal with Pugachev’s uprising, Radichchev, Novikov and Freemasonry. The periods of Alexander I and Nicholas I are represented by publications concerning popular unrest, the Dekabrists (Decemberists), Westernisers, Slavophiles and the Petrashevsky Circle; from the periods of Alexander II and Alexander III, there are numerous memoirs – with abundant examples from the revolutionary movements of the 1860s and 1870s and the Russo-Turkish War in 1877–1878.

An exceptionally high number of items have been preserved on the rule of Nicholas II, whose government policy is covered in more detail than that of his predecessors. One can find a variety of publications on the tsar’s personality, literature on the Russian-Japanese War of 1904–1905 and the State Duma. The revolutionary movement during the reign of Nicholas II is represented i.a. by stenographic reports on the activities of political institutions, organisations and their congresses, statutes and reports on the activities of political parties and associations, memoranda, and numerous agitprop brochures including those that were confiscated and burnt immediately after printing, so that only rare copies have been preserved.

What is richly represented is the literature (in Russian as well as in other languages) on the First World War, the February Revolution and the Bolshevik coup d’état of October 1917, the civil war and the first two decades of the existence of the USSR.

A world rarity is the collection of newspapers reflecting the social-political events in Russia in the period preceding the First World War and the activities of Russian émigrés before 1917, the events of 1917 and the subsequent civil war. Newspapers from the civil war and the press issued during the Second World War in Russian territories occupied by Hitler’s Germany have a special historical value.

An extremely large collection is that of the books and periodicals issued by Russian émigrés all over the world between the two world wars not only in Russian but also in Ukrainian, Belorussian and other languages.